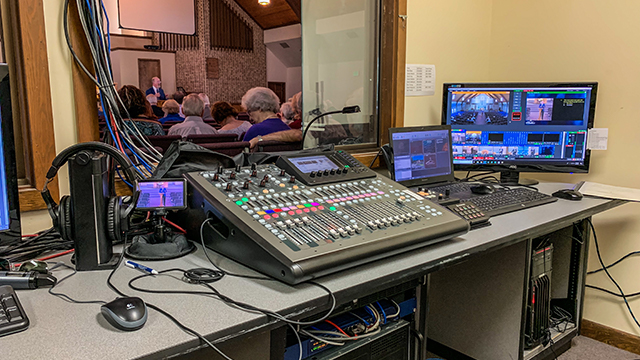 Do you want your worship broadcasts to be better than a single camera in the back of the room?

Below is a generic recommendation based on my experiences setting up live streaming solutions. What you choose will need to be adjusted based on a variety of factors, including:

Having said that, the following will be suitable in many church congregations.

Before I get into details about the setup, let me first explain the “why” of the design.

I want people at home who are unable to join their fellow Christians inside a church building to see everything they need to see and hear everything they need to hear to feel like they’re worshipping God, too. Therefore, in my opinion, the only way to do that is to produce and deliver something that looks and sounds like it was produced by a professional television crew.

To do this, you need more than one camera. Three cameras (one in rear centered on pulpit, other two on each side of auditorium) gives you the ability to show everything happening in your auditorium. It also allows you to move or adjust a camera without your viewers noticing.

Technology and automation has advanced the past 10 years to where anyone can easily mix audio, switch video and control graphics. It takes a little setup time, but the payoff is big.

I suggest PTZOptics cameras because I’ve installed many of them. They are good cameras. There are plenty of other manufacturers producing similar cameras (BirdDog and Marshall, for example) that will work just as well.

Regardless of what camera you choose, the KEY to all of this is a video transport technology called NDI. Created by Newtek, NDI allows you to transmit HD video and audio over ethernet. You no longer need dedicated video cables to send or receive video. Everything travels over existing ethernet cables on your network.

The ethernet cables also deliver power to each camera from your PoE (power over ethernet) network switch.

As for controlling each camera, that happens with the joystick controller (which is also powered by your network switch.) The joystick simply sends pan, tilt, zoom, focus and other commands to the camera over your local area network.

vMix can then stream your video and audio to three external destinations simultaneously, such as Facebook or YouTube, as long as you have a fast outbound (upload) internet connection. vMix can also send NDI video over your network to NDI decoders such as a BirdDog Mini or computers running Newtek’s NDI Video Monitor.

The key to success with this setup is your network and a computer capable of handling all of the video. Windows computers built for gaming usually work well (click here for suggestions) while the network switch and ethernet cable need to be able to handle gigabit network speeds to keep the video and audio flowing freely.

Also, don’t run ethernet cables more than 300′. If a camera is more than 300′ from the network switch, you will need to “recharge” the line with another PoE switch along the way.

Bring audio from your mixer into vMix via USB. This is MUCH better than trying to bring in audio through the microphone jack on your computer. It also allows you the ability to use Triggers and Shortcuts in vMix to automatically turn on and off certain audio inputs as you transition to new scenes.

Read more about my love for digital audio mixers here.

One of the keys to a great worship experience is for the viewer to be able to actually worship as if they were in the building. This is hard to do if they can’t see the song lyrics or the preacher’s sermon graphics.

To fix this, I recommend using ProPresenter to send song lyrics to your live streaming computer. The current version of Renewed Vision’s ProPresenter (version 7) has NDI output built-in, whereas version 6 requires you purchase the NDI module or use the vMix Desktop Capture app (free for Windows and Mac) to send your computer screen and computer audio out to your local area network as an NDI source. You can also use the vMix Desktop Capture app to send PowerPoint slides if you don’t own a ProPresenter license (although you should, as I explain here.)

By adding a live graphics feed to your list of video sources, you can then easily make double-box and triple-box layouts for your viewers to see multiple items simultaneously. For example, I like for viewers to see song lyrics, the song leader and the audience during congregational singing:

I also like for them to hear both the audience and the song leader. vMix allows me to turn on and off microphones automatically when transitioning to and from my singing layout through Triggers and Shortcuts. Utilizing triggers and shortcuts reduces the risk of mistakes by automating necessary tasks that can easily be forgotten during a live production, such as muting or unmuting a microphone or moving a PTZ camera to a preset location.

This last piece of the puzzle has completely transformed our control room. We are now able to confidently solicit help from volunteers who have no previous experience producing a live broadcast.

The Elgato StreamDeck, when paired with the open-source Bitfocus Companion software, allows you to use one customized device to control multiple devices. Below is a video I recorded explain how we are using our StreamDeck to control our audio mixer and vMix streaming computer:

The beauty of the StreamDeck is that the buttons can be customized digitally. You can change the text, color, or image displayed on each button, as well as what each button controls, through the simple Bitfocus Companion web interface. The interface also has a web emulator, allowing you to control the StreamDeck from any device on your local area network. I’ve used my iPhone on several occasions to control the StreamDeck from the auditorium – one time was from the pulpit while leading the Communion portion of our worship service.

There are many alternatives that are just as effective as the options shown above. These ideas are simply ones that have worked well for me.

You’ve got to crawl before you can walk and walk before you run. All of us make mistakes, even the pros, because we’re human.

Don’t be nervous about quality. Just be honest with your congregation. Tell them we’re going to try this, learn from our mistakes and keep working to make it better every week.

Ask questions. I am a member of several Facebook groups, such as Streaming Idiots and CMG Community, who are filled with lots of helpful people willing to answer your questions.

Don’t put it off. Give it a try today because tomorrow never comes.

Test it out. Make sure it works, then test it again.

Don’t be the only person in your congregation to know how to do this. One day you will be on vacation or sick.

Teach others what you know. Leave the world around you better than the way you found it.