With the goal of growing their live audience and reaching more of their target audience, Jon Podein and Paul Spurlin reached out to me in November 2016 for help. The goal? Simulcast their growing podcast show on Facebook Live.

Started in October 2011, the Jon and Paul Radio Show is a weekly live podcast devoted to sports, current news, and spiritual matters. It is recorded weekly on Talkshoe.com, a website that allows people to participate in live, interactive podcasts. Each episode is delivered to iTunes and other podcast aggregation platforms, where it is heard by hundreds of people each week.

With the growing emphasis on live video among social media platforms such as Facebook and Twitter, Jon and Paul asked me to assist them in finding a way for them to simulcast their live podcasts on Facebook Live. After discussing details of their goals, below is the solution I installed for them:

This was my first priority in this project. No matter how good your video may look, if no one can hear you, or if the audio sounds bad, then no one will watch.

The show has two hosts, so two microphones were needed. In addition, the show has live callers via the Talkshoe.com platform, so that website needs to be a third audio source into the mixer.

As for outputs, there are two destinations from the mixer: Facebook Live and Talkshoe.com. The callers and the podcast recording server at Talkshow.com need to be able to hear the hosts, and all of the audio needs to also feed live to the iPad connected to Facebook for the live broadcast.

Below is pictures of all of the pieces hooked up.

1) Mackie Mix8
http://astore.amazon.com/prostream-20/detail/B00VRPHV2M
I love this mixer. Mackie makes good stuff and it’s easy to use.

1) iRig Pre
http://astore.amazon.com/prostream-20/detail/B007534LFK
This device is the “middle man” between the mixer and the callers / Talkshoe.com. It sends and receives audio to both places simultaneously.

1) TRS to dual 1/4 inch audio cable
http://astore.amazon.com/prostream-20/detail/B000068O3C
This cable connects the iRig Pre from the headphone output to the mixer mic #3 input. This allows the hosts to hear Talkshoe callers.

1) XLR Male to 1/4″ Male mic cable (2-pack)
http://astore.amazon.com/prostream-20/detail/B0026KAUOI
Plug the two 1/4″ cables into the Main output jacks, then plug the XLR ends of each cable into the XLR Y-cable below

1) XLR Y-cable dual XLR female to single XLR male
http://astore.amazon.com/prostream-20/detail/B000068O58
This connects the two mic XLR-to-1/4″ mic cables above to the iRig Pre. Plus the single XLR male end of this cable into the XLR mic input of the iRig Pre.

1) Headphone distribution amp
http://astore.amazon.com/prostream-20/detail/B003M8NVFS
Allows each of the hosts to hear Talkshoe.com callers, each other, and any other audio feeding into the mixer

2) XLR mic cables
http://astore.amazon.com/prostream-20/detail/B004TVJL1U
Connect each microphone to the mixer (inputs #1 and #2)

2) mic stands
http://astore.amazon.com/prostream-20/detail/B005MII5MK
Holds each microphone so the hosts don’t have to hold them in their hand, reducing noise.

1) headphone jack adapter (5-pack)
http://astore.amazon.com/prostream-20/detail/B00PIWB2SO
Those 1/8″ jacks need to be adapted to 1/4″ for the headphone distribution amp. Good to have a few extras on hand.

1) TRRS splitter
http://astore.amazon.com/prostream-20/detail/B01HAVT4VC
This novel little device is what allow you to feed your audio from the mixer into an Apple iOS device such as an iPhone, iPad, or Mac. The 1/8″ jacks on these Apple devices are not your standard headphone jack… they are TRRS jacks, meaning they can serve as both a headphone jack and a microphone jack simultaneously.

1) 1/4 inch to 1/8 inch stereo cable
http://astore.amazon.com/prostream-20/detail/B000068O36
Connects one of the headphone outputs of the headphone distribution amp to the TRRS splitter microphone input (so that all audio from the mixer can be fed to Facebook Live)

Note: there are several other ways you can get audio into and out of your mixer. If you have cables that fit, try those first. They might work and save you some money.

My initial plan was to use the built-in camera on the their iPad, with the iPad sitting up across the table at eye level with an Arkon TW Broadcaster combo. I suggested this configuration because I wanted to keep this process as simple as possible.

However, if you’ve ever done any live broadcasting with iPhones or iPads using the front-facing camera, you quickly notice that everything is mirrored. That’s okay if it’s just you… but when you start to display posters and things with words on them, then everything is backwards… just like looking in a mirror. 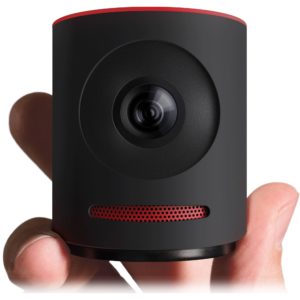 So, that’s when I recommended Jon and Paul purchase a Mevo. It’s a $400 live streaming camera designed by Livestream specifically for people who want to stream live video. It is designed to easily stream to Livestream and Facebook Live, but it can also be configured to stream to other custom RTMP servers such as Periscope, Wowza, and uStream.

I suggested it because it was easy to setup and use and it would accept external audio sources.

The setup was very simple and worked very well. The only issue we discovered was attempting to connect the Mevo to an Enterprise WiFi network, such as those you might find at universities. The Mevo does not work when authentication beyond a simple SSID password is required. The workaround was to create our own simple WiFi network for both the iPad and Mevo with our own router, then plug the router into the house network for internet access.

Overall, I am very happy with this project. It was simple, cost-efficient, and allows Jon and Paul to dramatically expand their audience via the most engaged social media platform available today.

If I can assist you in setting a studio for your live streaming projects, contact me.